Vestibulator: A new generation , programmable and digital therapeutic device designed for the treatment of Cerebral Palsy , Autism , ADHD , Learning Disabilities and more .
“I never dreamt of walking with my Son, neither has he thought of living a day without me” a mother of a 22-year-old son, Mrs Gracy Jerald said about her son who is suffering from Cerebral Palsy. Such is the grief of many more mothers across the world who suffer a complex of emotions such as sadness, denial, blame, fear and confusion on having a child with a special need. It is often said, “No language can express the power, beauty & heroism of a mother’s love (E. Chapin)”. Being a mother is a difficult journey and parenting is its major focus. Having a Child with Special Needs makes this journey more difficult & challenging. Being a special need parent requires a bit more of everything i.e patience, love, empathy, compassion, resourcefulness, finances and energy. Above all the special need moms are true warriors, they fight all the odds & situations life puts in front of them and they never give up. The tiniest development in the child’s medical condition or even half-spoken words of the child or just a hug from the child feels like a gift to her. All she wishes to see and hopes that her child becomes a successful adult in his/her life and can take care of themselves.
According to the World report on disability, 2011 One billion people or 15% of the world’s population, experience some form of disability. One-fifth of the estimated global total of between 110 million and 190 million people experience significant disabilities. In India, the population with disabilities is around 26.8 million, constituting 2.21% of India’s total population if one goes by the 2011 population census data.
Despite constituting such a significant proportion of the total population, people with disabilities live a very challenging life. Their ‘disability’ is often seen as their ‘inability’ by many and people, in general, have preconceived notions about their capabilities. Barriers to full social and economic inclusion of persons with disabilities include inaccessible physical environments and transportation, the unavailability of assistive devices and technologies, non-adapted means of communication, gaps in service delivery, and discriminatory prejudice and stigma in society (worldbank.org). However, it’s the more difficult scenario for those who are physically or mentally disabled and burdened with poverty and excluded from mainstream society. It results in a huge impact on the global economy and a higher risk of increase of poverty, unemployment and less education.
“Special is the word they use when they talk about me
They assume that my diagnosis fully defines me
Sometimes I wish I could only be heard and not seen
That’s what I often think about when I daydream”
D.T. Brunner.

Vestibular dysfunction is associated with the largest spectrum of the human population. According to CDC report 2011, approximately 170 million children live with developmental disabilities related to Vestibular dysfunction. Developmental disabilities are a group of conditions resulting from impairments that affect a child’s physical, learning, or behavioural functioning. Affected children typically have sensory impairments (hearing and vision loss), epilepsy or seizures, cerebral palsy, attention deficit hyperactivity disorder (ADHD), autism spectrum disorder (ASD), intellectual disability, or other learning disorders.
Children with developmental delays and disabilities are at greater risk of suboptimal health, educational attainment, and wellbeing than are children without such disabilities. CDC estimates an increase in the prevalence of Autism by 15% to 1 in 59 children and 4 in 1000 live births suffer Cerebral Palsy. Also, cases with ADHD and learning disabilities are also increasing alarmingly. Nearly 9.4% of children 2-17 years of age (6.1 million) have been diagnosed with ADHD, according to parent report in 2016. In addition to this 40% of adults above 40 years of age have some sort Vestibular dysfunction issue due to ageing leading to dizziness & balance issues, National Health and Nutrition Examination Survey (NHANES), USA 2004.

Vestibular stimulation/ therapy is an integral part of the treatment for the Cerebral Palsy, Autism, ADHD, learning disabilities, other neuro-developmental & balancing disorders. Treatment methods used for vestibular rehabilitation globally along with Medical Management are Acupuncture, Aquatic physical therapy, hippotherapy and conventional Physio & occupational therapy. Assistive tools used for exercises are physioball, balance board, scooter, swings etc. These assistive tools and devices have a great limitation of space, speed and frequency of stimulation; they do not even provide all the positions and postures required for complete stimulation. There is no device to record the line of treatment. The treatment plan depends upon the qualitative judgment of the therapist. 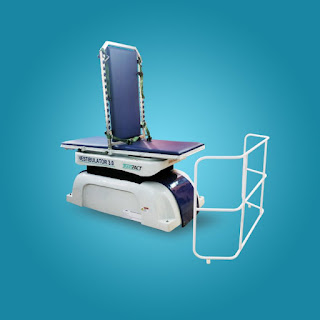 A new generation, programmable and digital therapeutic device– Vestibulator: An innovation evolved from IIT-Bombay suiting the guidelines of “Make in India” Initiative.
Vestibulator is an automated, dosimetric and ergonomically designed device which is useful for vestibular, neurodevelopmental and sensory integration therapy required for treatment of Cerebral Palsy, Autism Spectrum Disorder, learning disabilities, ADHD, and various Vestibular dysfunctions.
It is a comprehensive device which provides stimulations to the vestibular system against gravity in all the three planes of motions viz vertical, sliding, tilts- lateral, antero-lateral and linear and rotatory motion as well. Vestibular stimulations can be given in all matrices of motions & postures at variable speed, frequency, angle & time duration with predetermined maximum & minimum attributes to all motions.
Recording, Communication and Storage of data and are very essential features of the cloud-based -Vestibulator. Therapy Management, Pathology Grading along with safety and accuracy are the other features integrated with this device.
It enhances recovery, saves time, space and cost of the treatment. Improvement in balance & postural controls, concentration and independence in activities of daily living and increased interactive behaviour are proven results of the clinical study with Cerebral Palsy Children using Vestibulator.
This CE-certified device is co-patented by Transpact Enterprises and IIT Bombay and has received clearance from CDSCO, India.
The other upcoming rehabilitation healthcare products of the company in the developmental stages namely -Balance-o-meter and Mechanomyography device shall benefit healthcare professionals in clinical decision-making and real-time accurate record-keeping.

Transpact Enterprises Ltd, a SINE-IIT Bombay Incubated Med-Tech startup. It was conceived by a group of a technocrat, an artist and an academician, as a social enterprise in the year 2013 with a vision to impact the lives of people through continuous technological interventions and innovations. The company specializes in design, development, manufacturing, and distribution of therapeutic devices and rehabilitations services with analytics and management software system.
The Skoch Order- of- Merit (2019) recognizes Transpact as one of the top 200 MSME’s in the Country. Its Uniqueness was acknowledged by Bombay Management Association in 2017 and the company was bestowed upon the “Emerging Start-up “Award. Transpact was honoured with the “Zee 24 Taas, Young Innovator Award” in the august presence of Hon. Governor and Chief Minister of the State of Maharashtra in the medical-pharmacy category in the year 2017.
By |2020-05-21T05:48:01+05:30November 8th, 2019|Uncategorized|