Transpact Enterprises at TechFest 2016
We received a very delightful feedback for our forerunner product, The Vestibulatorat Techfest 2016. The concept, design, technology and the extent of its socio-economic impact & relevance received such an optimistic feedback from the doctors, technology experts, NGO’s, researchers, academicians & general public. From being called as the wonder device, to the queries about where the Vestibulator could be brought from, when will it be in the market for sale, its future applications and so on we experienced it all. So, I thought to share the experience and went ahead to pen down, “Transpact Enterprises at Techfest 2016”.
Techfest,Asia’s Largest Science and Technology Festival is the annual science and technology festival of Indian Institute of Technology Bombay. Techfest is known for hosting a variety of events that include competitions, displays, demonstrations, lectures and workshops. Started in 1998 with the aim of providing a platform for the Indian student community to develop and showcase their technical dexterity. The activities conclude in a grand three-day festival event in the campus of IIT Bombay which attracts people from all over the World, including students, academia, corporates and the general public.
TechConnect was an exhibition organized by Techfest from 16th to 18th December 2016 in collaboration with IRCC, IIT B to highlight the research & development activities of IIT Bombay. It aimed at showcasing the technologies developed in IIT Bombay to satisfy the upcoming requirements of the industry also meet the critical social needs of the country and benefit the society.
Transpact participated in Techconnect representing the Industrial Design Centre of IIT B. For the first time the Co-patented technology Transpact & IRCC was made available to more than 1,65,000 people   to look at. Yes! The Vestibulatordesigned in joint research with The Industrial Research and Consultancy Centre, IIT B to stimulate the vestibular system of the user especially for children suffering from Cerebral Palsy & Autism was exhibited to the world; a unique, innovative, mechanized, digital healthcare solution (device) to achieve   maximum Vestibular Stimulation for vestibular, neuro-developmental and sensory integration therapy.
It was an enriching and overwhelming experience for the team of Transpact Enterprises. Glimpses of which areattached herein. Techfest is entirely managed by students of IIT Bombay with a three-tier team structure. The hospitality the coordinators & team members offered was amazing. we appreciate them for such wonderful & timely arrangements of things. 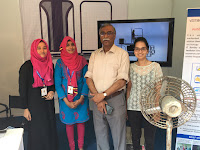