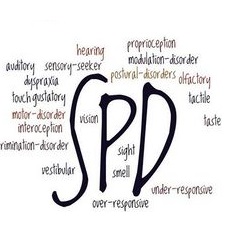 Sensory Processing Disorder formerly also called as Sensory Integration Dysfunction severely affects individuals’ sensory preferences in way that it interferes with their normal, everyday functioning especially Children. Sensory issues can be categorized as hypersensitivity (over-responsiveness) and hyposensitivity (under-responsiveness) to sensory stimuli. The symptoms of sensory processing disorder exist on a vast spectrum from very mild to severe. Children with sensory processing disorders are initially fussy babies which grow anxious as they get older. Few signs/symptoms of Sensory Processing Disorder are as follows:
Over sensitivity to stimulation: The Child overreacts to or does not like touch, noise, smells, etc.  A child might get annoyed or cover his/her ears, run away or start crying in anticipation of certain sounds or while hearing them. At times A child might be on the different end of the spectrum and would prefer very loud noises and keeps the TV, radio or music loud. Some children might not like being touched
Avoid crowds/ gatherings: If your child does not like going out in places with many people around can be an indication of SPD.  Such children show unexpected sudden mood changes and temper tantrums in crowded places. They get irritated with being touched by others, noises, etc. They avoid/ dislike standing near others.
Discomfort with Clothing: The child might extremely irritable when you dress him/her; The tags, the fit of the dress, the texture of the fabric seems to make him/her uncomfortable in clothes.
Food Preferences: Children with SPD are very choosy in what they eat. The texture, taste, smell & temperature of food matters them a lot. some might prefer eating crispy food others might like soft texture foods like jellies etc.
Play Activities: Some children might be overly fearful of swings and other playground equipment’s; some might dislike his or her feet to be off the ground.  Some children might be very fidget and unable to sit still and enjoy movement-based play like spinning, jumping, etc. They Often harm other children and/or pets when playing, i.e. doesn’t understand his or her own strength. Children with tactile issues avoid touch sand while playing and even dislike walking barefooted on the grass.
Sensory processing issues are multifaceted and wide ranged phenomena’s. If a child exhibits few of the above stated symptoms does not mean that the Child is suffering from SPD. However, If you suspect that your child has SPD consult a medical expert for further evaluation, diagnosis & treatment.
By |2020-05-21T06:02:19+05:30April 11th, 2017|Uncategorized|