International Day of People with Disabilities i.e. 3rd December is considered as an international observance day promoted by the United Nations since the year 1992. This day especially aims for promoting an understanding of disability issues or problems and to mobilize support for the moment of dignity, the well-being of people and the rights of the people with disabilities. This day also looks forward to increasing the awareness of the gins to be derived from the integration of persons with their disabilities in every aspect of cultural, political, economic and social life. 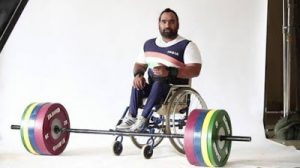 As we talk about Disability and dreams, here’s a question for all. Can you imagine someone whose legs have been affected by polio and cannot walk participating in a sport like a powerlifting at an international platform that requires extreme power and physical strength? Mr. Rajinder Singh Rahelu is the answer to this question.
Mr. Rahelu is an Indian Paralympic Powerlifter suffering from “Infantile Paralysis”. Since his infancy, he has not been able to walk. But he did not let his disability come in between him and his dreams. He continued to practice and today, he has created a history of his own by winning a silver medal in powerlifting at the Common Wealth Games 2014. He initially started by lifting a weight of 75kgs but his rigorous training and motivation made him enough to actually lift a weight of 115kgs in a period of 6 months. After grabbing his 1st medal in the field of powerlifting in 1997 at Punjab Open Meet, he never looked back. In the next consecutive year, he won National Powerlifting Championship which gave a great push to his career and life and his achievements have never stopped after that.
He never let his disability stop him, he kept on overcoming the life challenges with his immense dedication and devotion. Today he is a successful coach at Government of Punjab’s Sports Department. He is also training the specially-abled powerlifters.
It is the disability heroes like Rahelu that keep us inspired during our lowest days in life. On this Disability Day, we can see him as an inspiration to the 180 million specially-abled Indians to overcome the impact of their disability on their lives!!!
By |2020-05-21T05:45:35+05:30December 10th, 2019|Uncategorized|